Hello everyone, friends! Welcome to a new review of a 3D printer from the Russian company PICASO 3D – Designer Classic . This is the most budget model in the manufacturer’s lineup and is a rethinking of the very first Designer 3D printer . 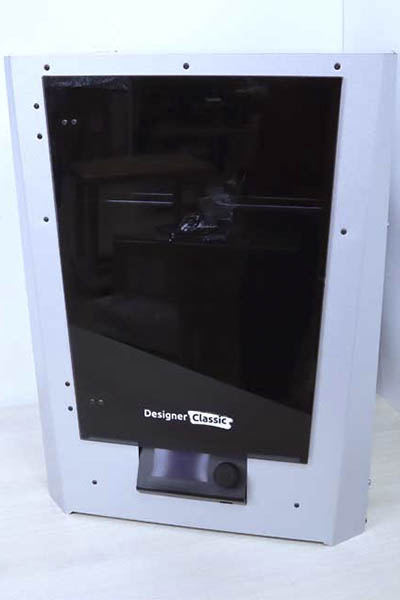 In the box, along with the printer itself, we receive a standard set of add-ons, namely, a reel of PLA plastic, always red, branded adhesive glue in a pshikalka, a modest set of tools, there is also a spare nozzle of 0.5 diameter and a flash drive. 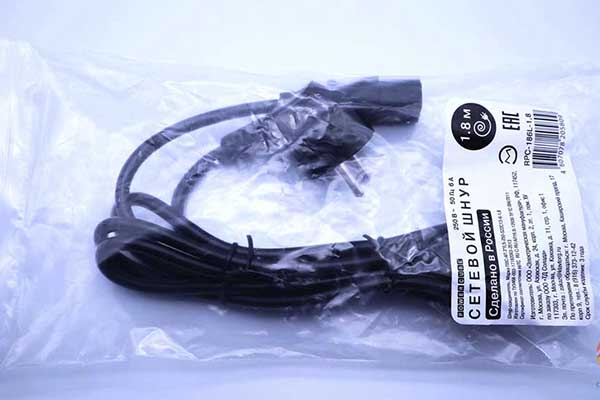 The design of this printer refers to the very first 3D Designer model, only the door opens to the left, and does not swing up.

The casing is completely made of the standard PICASO composite panels. They are made of aluminum-reinforced plastic. As a result, the printer turned out to be quite light, without losing rigidity.

The kinematics are closed on all sides and according to the first assumptions it was H-Bot, but upon closer examination it turned out that this is a deployed CoreXY. The carriage moves on shafts along all axes, the shafts are fixed in printed holders and one bolt to the body. 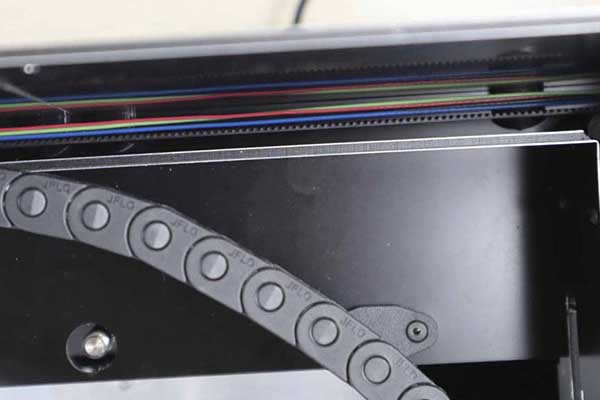 The Z-axis also rolls on shafts, driven by a T8 trapezoidal screw instead of a ball screw. On a frame made of the same composite panels, there is a 215x210mm table made of heater and glass. The declared print area of ​​this printer is 200x200x210mm. In general, the whole mechanics causes a feeling of flimsy, and the sound of its movement, unfortunately, is not the quietest.

Speaking of the print head, it is worth mentioning that a block 250 with a Teflon tube is installed here, which means that it will not work to print with high-temperature plastics. The unit has a 0.5mm nozzle by default, which is suitable for printing with filled plastics.

Overall, this is a good PICASO 3D single extruder head. There is a 40 mm fan at the front, and a model blower at the back. Own feed system with two drive wheels. Unfortunately, there is no encoder system for checking the presence and movement of the filament. Pleased with a very playful heater. Heating from 25 to 220 degrees, it feels like 40 seconds.

Optionally, the head can be equipped with systems for controlling the flow of plastic, tracking its presence and a control system for the first layer. All the connectors required for this are already present on the board. Due to the fact that the electronics are installed from the X platform, everything works without problems immediately upon connection. It is also possible to install a high temperature heater block.

Now let’s talk about electronic stuffing. As mentioned above, all the hardware is the same as on the X platform models. Everything is controlled by a proprietary board based on the STM32 controller, a board with TMC 2130 drivers is connected to it by a connector along all axes. This adds reliability, and if it becomes necessary to change the driver, then you do not have to change the entire motherboard. 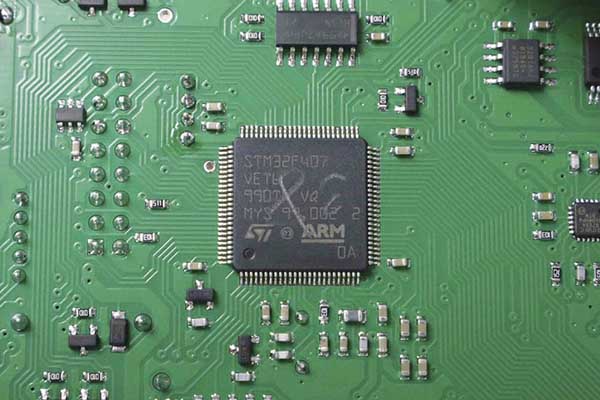 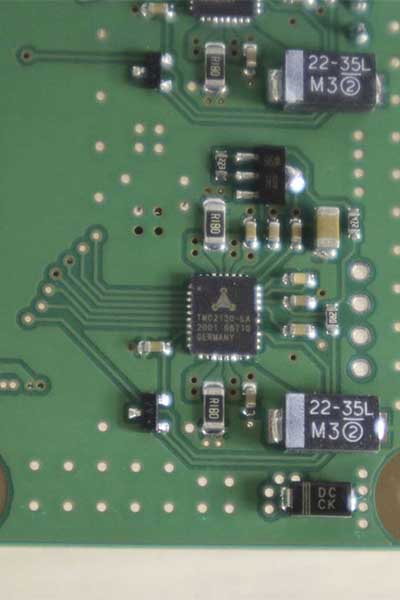 To avoid overheating, the drivers are cooled by a small turbine through a printed jacket. A three-hundred-watt 24-volt power supply is responsible for the power supply. The familiar NEMA 17 motors are installed along the axles. 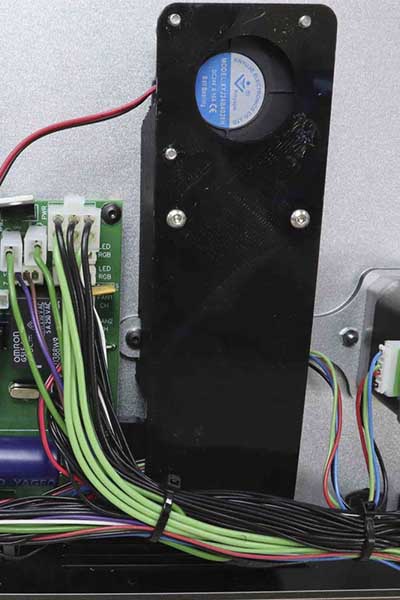 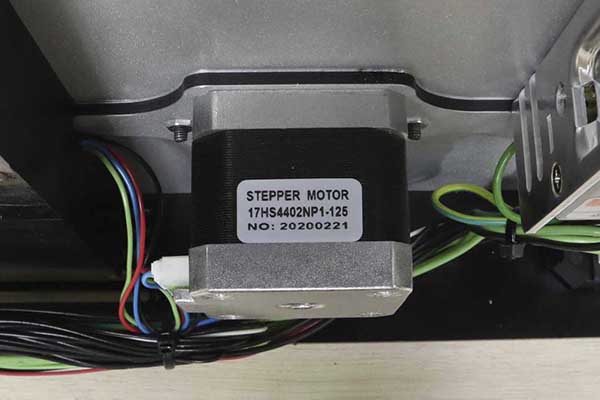 The screen with the encoder also migrated from the older models, in fact, like the firmware, but with minor changes. In particular, the table is calibrated here mechanically, by rotating 3 spring-loaded screws that hold the table. The menu allows you to load and unload plastic, there is a table calibration assistant, which was mentioned above, you can set the Z-offset. A definite plus for beginners in 3D printing will be that the entire menu is completely in Russian and written in understandable language. 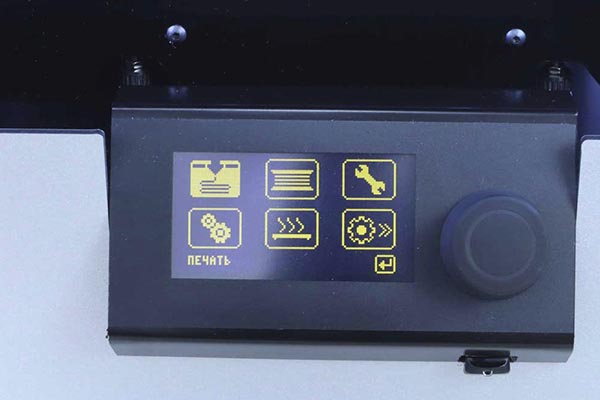 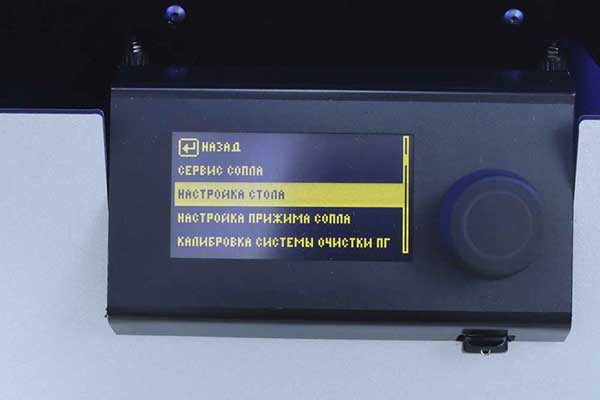 To print, we need to install the PolygonX program from a USB flash drive, which works with PICASO 3D printers . On this flash drive, by the way, ready-made tasks are pre-recorded to check the printer’s performance and the accuracy of the table calibration. When choosing a job from a flash drive, right before printing, you can select the material and print speed, this is very convenient and allows you not to reconfigure the printer for each individual material.

Before printing, the printer finds the zeros of all coordinates, bouncing right off the walls. This is the “chip” of the TMC 2130 drivers, which were mentioned above. Thanks to this, it was possible to get rid of the limit switches, which also increased the reliability of the printer. In addition to parking, drivers can catch missing steps to avoid layer displacement.

Polymaker red  PLA was  printed into a 20mm cube. Here, as in older models, there is a silicone cleaner, through which the printer passes before printing to remove the flash from the nozzle. A very handy feature. The cube was printed using a standard PLA profile.

Let’s check the accuracy of printing using an electronic barbell. X – 20mm, Y – 20.02mm and Z – 20.04mm. Everything is clear. By the model itself, everything is also good. The layers lay flat, there are small jambs along the surface. The only thing that is striking is the non-hidden seam on the back of the model. No matter how I tried, I didn’t manage to remove it. You can only try to move to a corner, but you will have to do this separately for each model. Quite a significant defect. 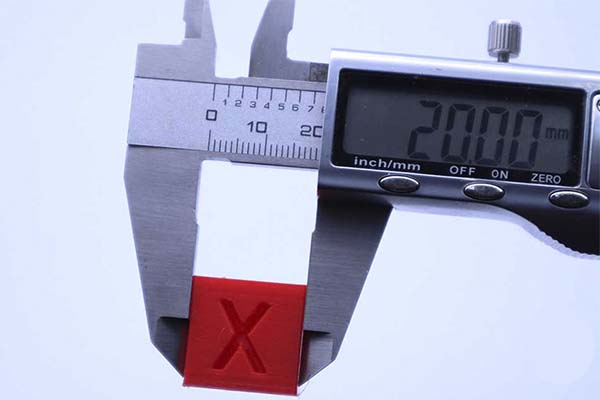 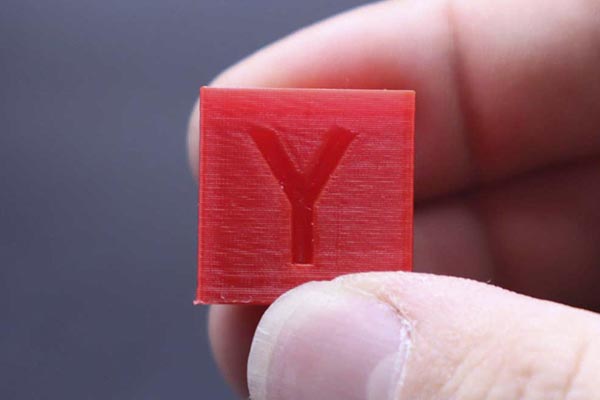 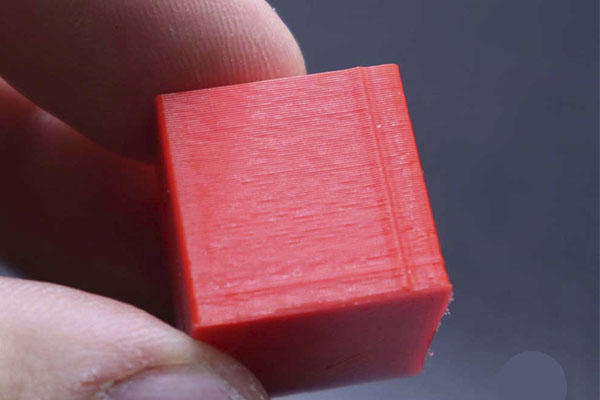 The next project we will print with several plastics at once. First, let’s print out the eBamboo base from eSun. The main body will be printed from dark green PETG from Tiger3D , and the centering cylinders from TPU from eSun .

We’ve got a business card holder in the shape of a sofa with wooden legs. Looks great. There was some hairiness when printing with eBamboo, but it was easily removed by hand. All other prints came out great. The photos show the resulting quality of the finished product. 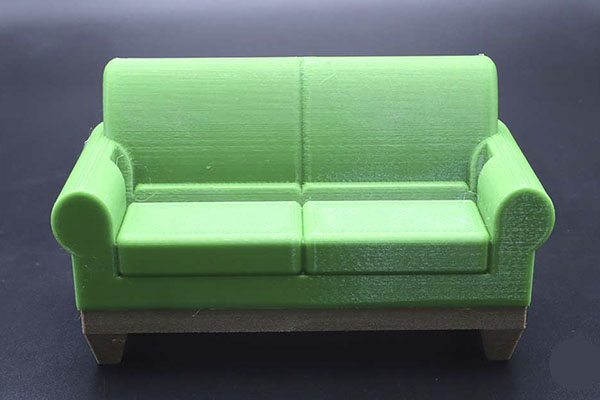 For the next print, we need to go a little deeper in the settings. The fact is that Picaso Designer Classic cannot print ABS plastic out of the box. 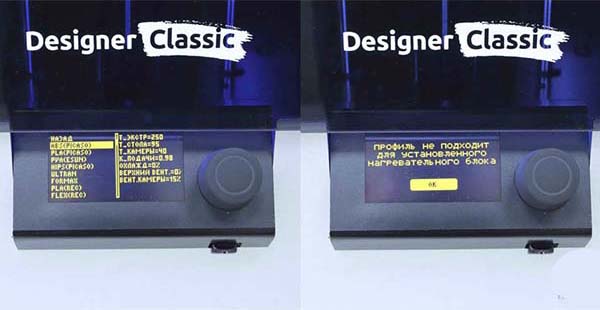 In order to enable him to do this, you need to follow these steps – Open the Plastic menu in the printer; This is the second icon on the screen. In this menu, select Profiles> Change Profile> ABS (PICASO) and change the temperature for the first layer. As you can see, everything is very simple. Let’s print a green ABS turbine from eSun . For this model we chose the highest possible quality, but the model itself had to be made smaller than the original size. 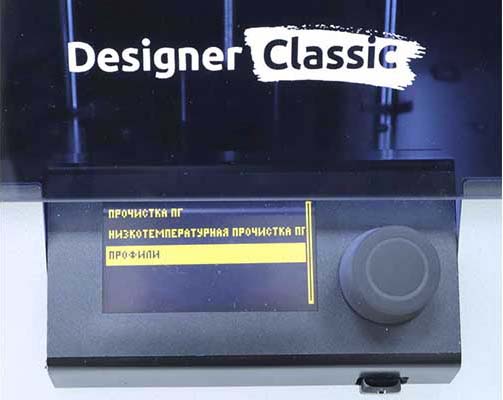 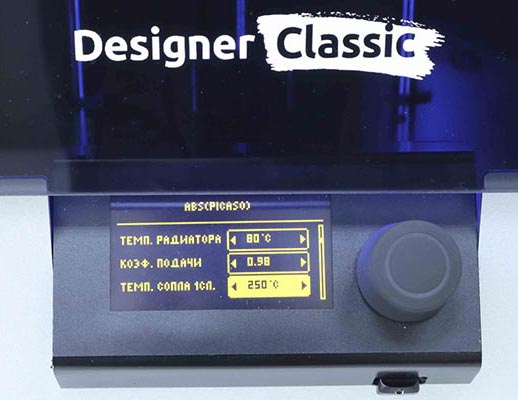 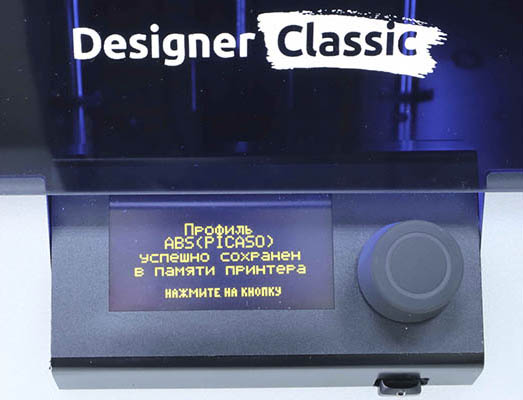 Let’s take a look at the finished model. As you would expect, it printed great despite the thin blades. The 10 micron layer gave an excellent surface, the layers are imperceptible, although there are small errors on the blades from the retraction. Perhaps this is to blame for the fact that we printed with a standard profile for ABS. 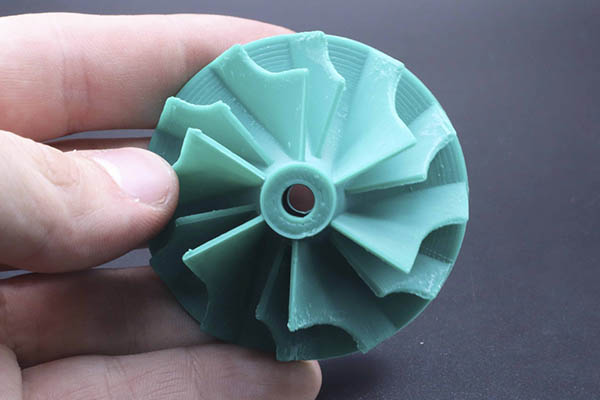 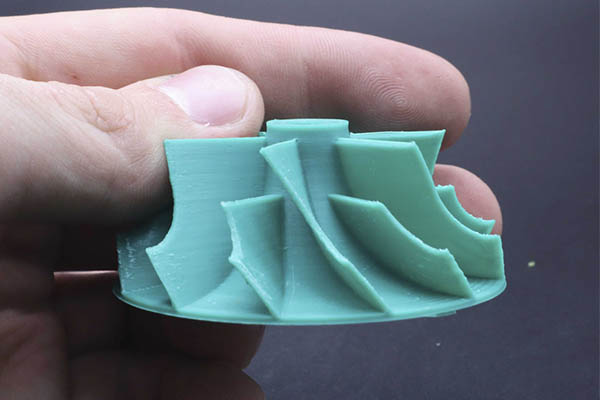 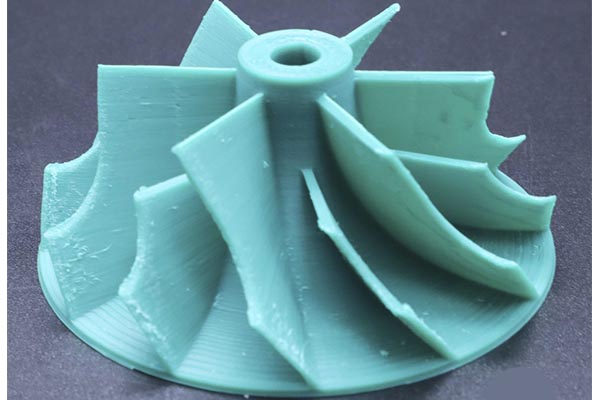 This result suggests that this printer can be used for simple technical equipment.

Let’s continue testing the printer on engineering plastics. The next in line will be ePA-CF from eSun . It is carbon-filled nylon, but slightly easier to print than regular nylon. From it we will print a bracket for a wall shelf. For printing, we created a profile specially for it: Nozzle – 250, Table 80, Airflow 10%, Circulation: 0%

As a result, we got such a product. It is clear that such brackets need 2 pieces in order to hang the shelf, and the quality can be seen on this model. It turned out to be durable, but at the same time lightweight. The layers are well baked, no jambs stand out. 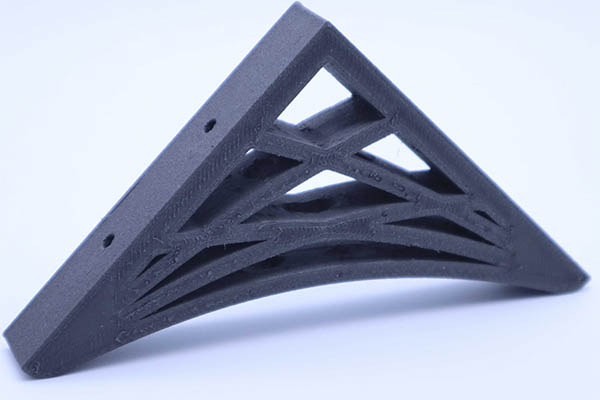 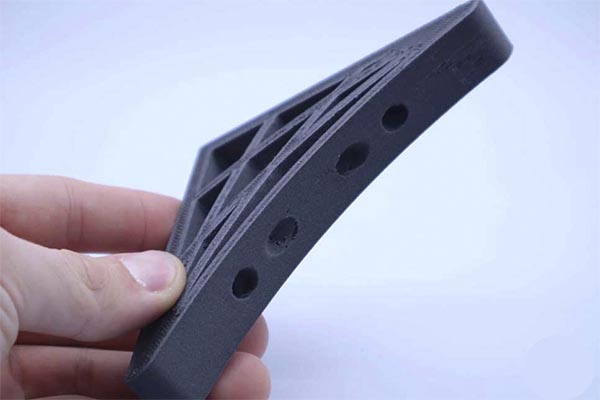 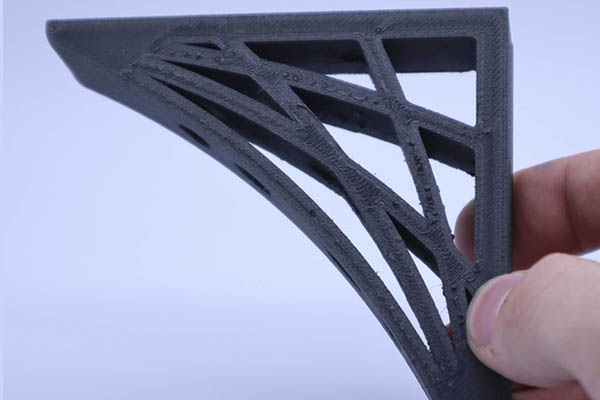 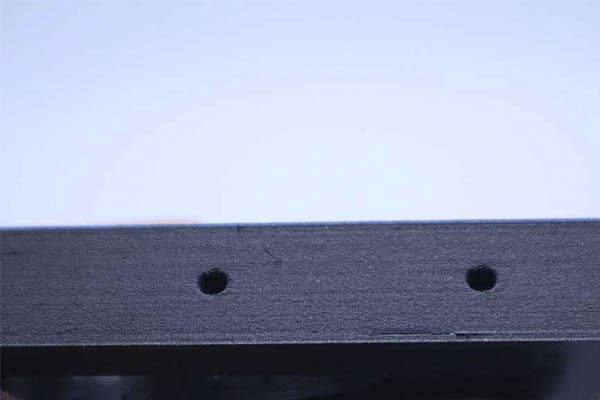 Unfortunately, printing with carbon on this printer will not work for the reason that a brass nozzle is installed here. The carbon will wear it off over time and the accuracy will float away with each seal. To print with these filaments, it is worth purchasing and installing a 400 unit with hardened steel nozzle for this printer.

Now we will print with nylon without filling. Since this plastic is in most cases used to print gears, we will print it. We printed with a closed chamber with the settings – Nozzle: 250, Table: 100, Airflow 0%, Circulation 0%.

To begin with, the model did not work the first time. Nylon stubbornly wanted to break away from the glass, even with an adhesive, and it was only possible to resolve this by applying the glue of a pencil. Since the model is small, it printed well. All the teeth were sealed and nothing led anywhere. The plastic shrank significantly and the model became one millimeter smaller than the digital model. But the shrinkage plus or minus is uniform along all axes, which means it can be compensated for with a scale. If it weren’t for the adhesion problems, then we could say that the print went well. 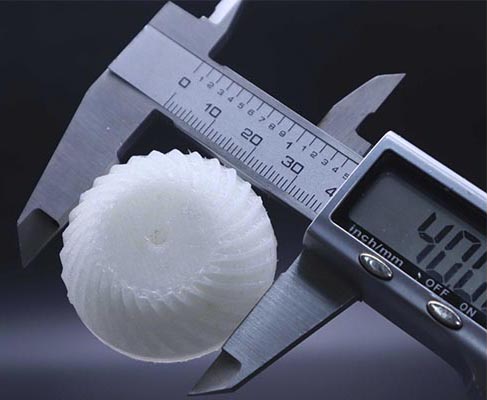 In conclusion, the Designer Classic 3D printer is a kind of return to the origins of PICASO 3D. In many ways, the printer is very similar to the first 3D Designer, both externally and structurally. In electronic terms, he certainly grew up, taking on board electronics from the X series printers. But he is mortally missing some of their functions. Also frustrating is the general noise of work, some design errors and errors in the firmware, as with ABS. This printer is not suitable for professionals for a number of reasons: it is impossible to print with high-temperature plastics out of the box, there is no electronic calibration of the table, there is no system of encoders for controlling the supply of plastic. The small print area also imposes its limitations.

For such tasks, we advise you to consider the older models of the line.

However, in addition to the above disadvantages, this printer has very significant advantages. For its money, this is a great workhorse and an open textbook. It doesn’t take a long time to set up and disassemble, and everything you need for printing is already included in the kit. The printer lends itself well to modification when available. After installing additional plastic control modules and the first layer, Designer Classic will be able to compete in quality with top-end single-extruder printers. But even out of the box, it is able to delight with print quality, using low-melting, environmentally friendly materials. This printer is perfect for educational institutions and introducing students to new technologies. Also, people who just want to try 3D printing technology for the first time will find a reflection of all their desires in this printer.