3D printed casts are becoming popular in the medical field. These casts can be made faster and cheaply than the traditional orthopedic casts. Read this article to find out more about 3D printed casts, the printers used to make them and more.

3D-printed orthopedic casts are increasingly being used in treatment of fractures. However, so far, this technology has not received widespread use. In this article, we look at the advantages and disadvantages of 3D printed casts  in comparison to traditional plaster casts.

We’re also going to look at what the future holds for this conservative but reliable and effective treatment method.

Orthopedic plaster cast is used to facilitate the healing process of broken bones. The cast acts as a pin and fixes the limbs in place to prevent improper bone healing.

Modern dressings are usually made of plaster or fiberglass. The idea of ​​creating a fixing (immobilizing) dressing was promoted the Russian surgeon Nikolai Ivanovich Pirogov. In 1847, during the hostilities in the Caucasus, he first used a fixing “molded bandage”.

At first, Pirogov used starch as a hardening agent. Later, he replaced it with gutta-percha and, finally, with  gypsum . The modern plaster cast is a hygroscopic  bandage sprinkled with plaster. The plaster is produced industrially in sealed packaging.

When soaked in water, the gypsum plaster begins to harden. Applying a plaster cast can take up to 45 minutes, and a full cast can take 24 to 72 hours. Removing plaster is also a complex procedure. The hardened plaster can only be safely broken with a special electric saw.

There are many opportunities to improve this technology, and the pioneers of 3D printing saw the potential of additive manufacturing to solve emerging problems.

The first 3D printed anchors were introduced in 2013. At the same time, the orthosis production scheme became clear. It consists of 3 main stages. 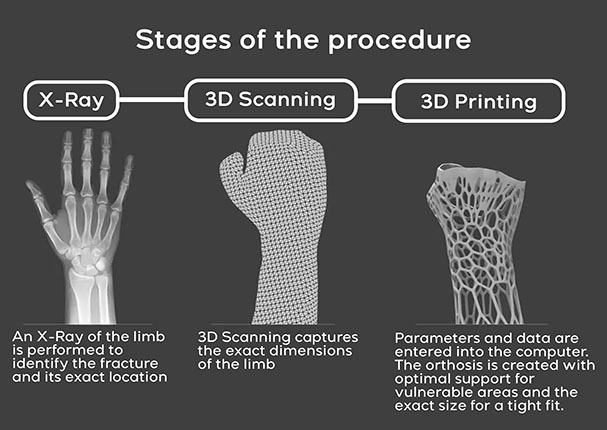 A standard x-ray of the patient’s limb is taken to determine the exact position of the broken bone.

The orthosis is 3D printed from lightweight plastic and can be fitted to the patient in a matter of seconds.

Although the technology has been around for almost a decade, 3D printed orthopedic casts have yet to gain significant acceptance. This is mainly due to the lack of specific data on their practical benefits.

However, the situation has began to change.

In a 2020 study, Chinese scientists compared 3D-printed orthopedic casts for the treatment of fractured hands with traditional plaster casts and external fixed splints. The results of the study showed that, compared to plaster, 3D orthoses provide a higher level of comfort and reduce pain. The technology is being used more and more often.

Children’s Hospital in Colorado announced that it was the first pediatric hospital in the United States to offer  3D-printed orthoses for children. The new technology improves treatment results and removes a number of limitations of traditional methods of treatment.

The invention of plaster was one of the greatest medical discoveries. However, it has a number of disadvantages that can be overcome using 3D printing. For example, applying a plaster cast can be a long, laborious, messy and even painful process. Accurate measurements need to be care taken fully.

3D printing solves all of these problems. The cast can be easily fixed in seconds with a pair of clamps. Removal is also easy and does not require the use of hazardous electric saws.

Another disadvantage of plaster is that it is not breathable. The plaster prevents air contact with the skin. This can lead to clogged pores. Moreover, some patients can develop dangerous skin infections in their wounds. What’s more, constant heat, sweat, and pressure can cause very unpleasant itching.

3D printed casts or orthoses are made in form of a lattice, which consist of open sections with plastic posts. This ensures the required structure and incomplete coverage of the hand, which leads to a higher level of comfort. 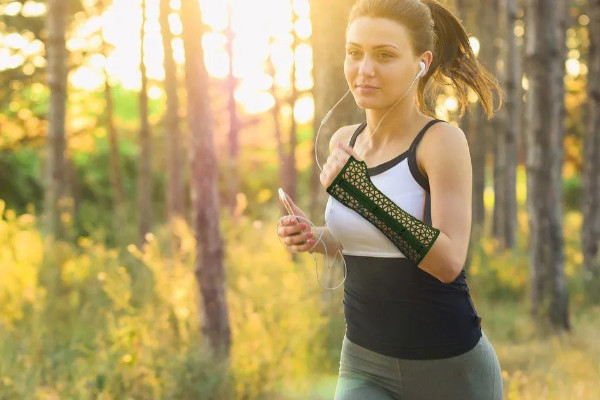 Also, gypsum cannot be wetted as water will destroy the structure. Therefore, a patient with a traditional cast cannot take a shower or may be afraid of getting caught in the rain. On the flipside, 3D printed orthoses are made of water-resistant plastic. You can even swim with them.

Another disadvantage of conventional gypsum is the inability to properly distribute pressure. Perhaps this is the biggest disadvantage, as it slows down the healing process. On the other hand, 3D printed orthopedic casts are custom designed and their lattice structure can be designed to add strength to specific areas that need support and to relieve pressure elsewhere.

The idea of ​​the mesh structure of the orthopedic casts was fronted by New Zealand engineers Ollie and Jake Evill. The two developed a prototype in 2013, and a little later created one of the world’s first 3D printed orthopedic casts. The cast was lightweight, breathable, high-tech and provided localized support for broken bones. This orthopedic cast showed the promise of this technology. 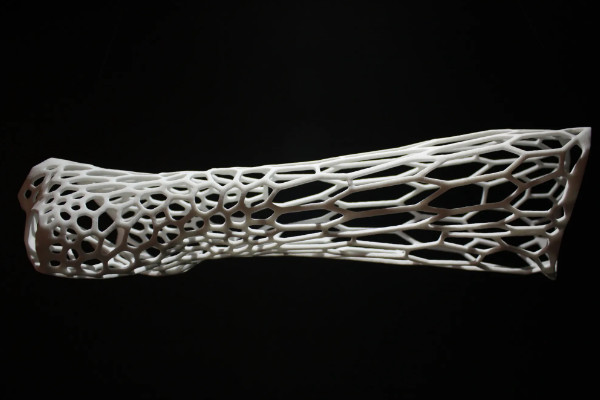 Let’s now talk a little about specific 3D printing technologies in the field of creating orthoses and companies that provide such services to patients and doctors.

In most cases, FDM 3D printers are used to create 3D printed orthoses. The model is formed by layer-by-layer application of molten plastic filament.

Also consider the maximum build height. Large format 3D printers such as the Raise3D Pro2 Plus and Picaso Designer XL are great for these tasks. These printers are highly reliable and capable of 24/7 operation. 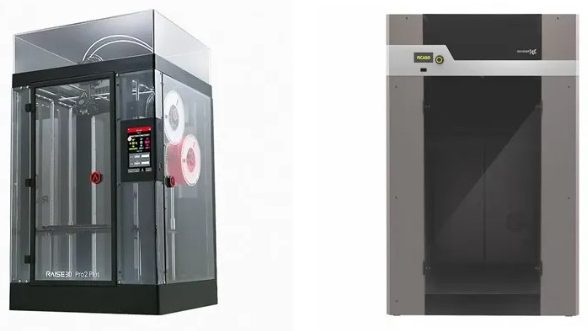 Recently, orthoses have begun to be printed on photopolymer resin 3D printers. These printers printer faster and the finished surface of the finished models is more pleasant to the touch. However, the technology has its drawbacks: the need for post-processing of models and a significantly higher cost of materials for printing.

The FormLabs 3L, together with the whole Formlabs ecosystem, can become an indispensable tool in 3D printing orthopedic casts. On the other hand, the Phrozen 3D printer is affordable and will make sense for anyone wanting to to try 3D printing casts.

In this section, we look at some interesting examples of businesses from different parts of the world that are involved in 3D printing casts for broken bones.

CastPrint is a service bureau founded by entrepreneurs Janis Olins and Sigwards Krongorns in Latvia. The company not develops orthoses for individual parts of the hands (wrist, thumb, other fingers), but also for the treatment of leg injuries. 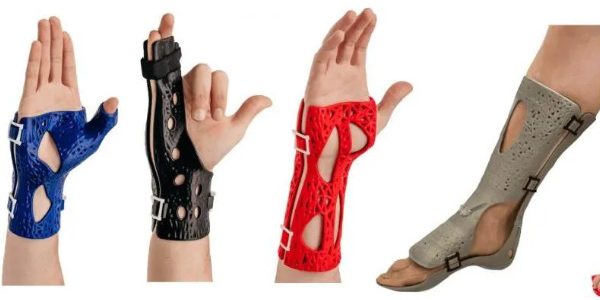 CastPrint has expanded its business to the point where its technology has become commonplace in the Latvian healthcare market. The firm has also expanded into the UK, where several private healthcare firms have introduced the development into daily practice.

The Spanish company Xkelet has decided to speed up the 3D printing of orthopedic casts. Its COO, Tim Dobrinich, was unhappy with the 2-hour scan to production process and decided to cut it down to 15-30 minutes. He used a dedicated camera mount on the iPad and a specially crafted app.

The patient’s limb is photographed from all angles and a cast model is formed in seconds. This eliminates the need for longer, separate 3D scanning and simulation.

In April 2021, the company received an award at the international design festival Red Dot Award in Berlin for the design of a 3D printed casts.

The Russian company Zdravprint took a different path and began to create orthoses based on the patient’s biometric parameters. A special program converts the patient’s hand dimensions into a 3D model of an individual orthosis. The print time is 15 to 90 minutes.

The products have an internal three-dimensional structure, which makes the thermoforming process more convenient. Forming the product for the patient takes 5 minutes.

Summing up, let’s look at the pros and cons of the new method.

The advantages include patient comfort, easy application and removal, as well as a lower cost compared to a plaster cast. Individual modeling of the 3D printed orthopedic cast makes the treatment process much more efficient. Moreover, the open lattice structure improves breathability, which is especially important when treating children.

3D printed casts are durable, lightweight, and do not restrict movement like conventional plaster. The casts can also be reused, which helps reduce costs (as suggested by Xkelet). Finally, the orthopedic casts can be remodeled and modified using the existing structure and less material.

On the downside, there is less data on the effectiveness of the use of 3D printed casts in treatment of injuries compared to using plaster. Even now, with more research being conducted to support this efficacy, medical consensus is yet to be reached. For this reason, the technology has not yet become widespread. It will take time to collect the evidence.

Also, the use of orthoses for the treatment of leg fractures is still difficult. Leg orthoses are comparatively larger and more inconvenient than their counterparts for treating hand fractures. The casts make it difficult to wear socks and shoes. Moreover, they have more restrictions. 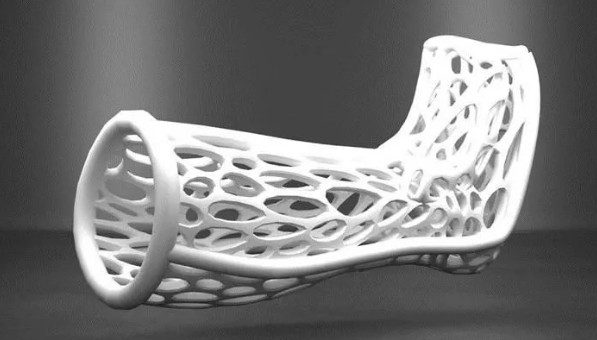 One of the next tasks that 3D printed orthoses must solve is to fix entire limbs, not just the hand, wrist, foot or ankle. Industry leaders are trying to develop arm orthoses that extend beyond the elbow to the shoulder and biceps. There is also research on orthopedic casts for the hip to treat leg fractures. Some of the most devastating injuries occur in these areas, mainly from car and motorcycle accidents. At the moment, plaster casts are used for such injuries.

3D printed orthopedic casts for broken bones are currently available worldwide in the commercial healthcare market. However, patients receiving free public health care are unlikely to have heard about them. This is primarily due to the same lack of the necessary research base that clearly confirms the effectiveness and safety of the technology.

However, we hope that research will be compiled soon and the technology will be available to everyone.

Above is an example of an automated 3D process in orthopedics. The scan is received through the phone (the shooting process took 5 minutes), is automatically converted into a 3D model (20 minutes), and finally printed on a 3D printer (5 hours). A Raise3D Pro2 Plus printer was used to print the orthosis.

Watch the feature below for more information: