After my moderate experience a while back with the Tronxy X5S, I stopped testing Tronxy 3D printers for the time being. However, I recently decided to give the Tronxy’s X5SA Pro a try. 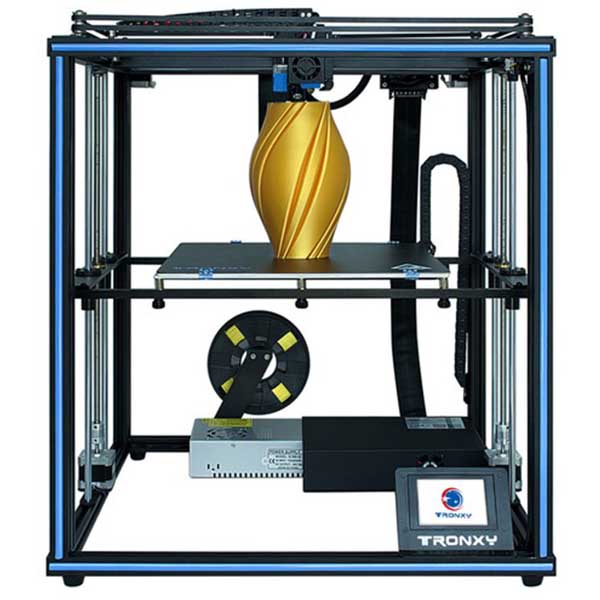 From the specs, the printer looks very promising. For instance, in addition to the CoreXY construction, common features such as a stepper driver, touchscreen, and a reasonable mainboard are built into the printer.

In this Tronxy X5SA Pro review, I’ll provide my experience with testing the 3D printer.

We have the TRONXY X5S, the earlier version of the X5SA Pro in our lab. However, the printer did not even make it to a test report. We found the quality of the unit to be too low for what we have in the market.

So, what does the TRONXY X5SA Pro has to offer?

CoreXY vs. “Prusa i3” Structure

Almost every 3D printer made in China gets its inspiration from the Prusa i3 from the RepRap project.

What the Prusa i3-inspired printers have in common is that their print head only moves on the X-axis (“left-right”) and Z-axis (“up and down”). On the other hand, the heating bed only moves backwards or forwards on the Y-axis during 3D printing.

And this is where the problem is: the heating bed moves a lot with each print layer – the Z-axis moves 0.X mm higher for each two-dimensional print layer. This mass of the print bed has to be accelerated and decelerated in hundreds of layers, and this has a negative impact on the printing speed and/or the quality of print.

The CoreXY solves this problem with a completely different structure.

Here, the print head moves on the busy X and Y axes and the heating bed is moved down by the previously sliced ​​layer height after the completion of a layer. Only the much lighter print head needs to be moved.

Given all the problems with Prusa i3 models, why are we still printing with them?

There are various reasons for this:

In summary, the little hype about the CoreXY has faded a bit.

For the sake of completeness: There are of course other types, such as B. the H-Bot construction (very similar to the CoreXY) or Delta printer.

However, in summary, there is simply no such thing as the best construction method. Each type of construction has its own advantages and disadvantages.

According to the graphics in the Tronxy X5SA manual, the print bed should be removable. I’m assuming that a film, as is so often the case, was fixed with appropriate clamps (see below).

The printer comes with the expected accessories for assembly.

Unfortunately, as is so often the case, there is not enough filament (see screenshot). Therefore, if you order this printer, make sure you also buy some filament spools (see the best PLA filament we recommend).

Other features such as B. the auto-level sensor, the filament sensor and the power failure feature largely depend on the firmware integration.

The cable management looks better than some of the others from the outside. Ribbon cables, chain links (check here for the Ender-3 ) – at 24V – that can work.

The 32-bit mainboard is fast enough for a decent GCODE throughput and thus high printing speeds.

The Tronxy X5SA is not revolutionary but does the job really well.

Long story short: I had my doubts about the Tronxy X5SA Pro, but curiosity prevailed – I ordered it from Amazon.