Just before Christmas, Gearbest’s new Saphire Plus 3D printer arrived at my home. In theory, I wanted to set up the printer briefly on the weekend or Monday before Christmas. Unfortunately, the project didn’t turn out to be that easy.

But first about the scope of delivery

The Saphire Plus is typically Tetris-style again and packed with plenty of foam for protection. Nothing should break in the transport and it didn’t make the impression either. However, I missed various screws, for example, to be able to attach the heatbed to the guide.

No bag and no screws included in the scope of delivery. If you don’t have such small things in your home range, you have to go to the local Bauhaus.

The usual suspects are included. Screws, tools, a small manual, a card reader with a MicroSD card on which one or the other PDF, video, etc. is. So you can start assembling right away.

First of all, it has to be said that the printer is just HUGE. Not much space is left on the table when assembling.

The screws and all the small items are packed in bags, all of which are super labeled. 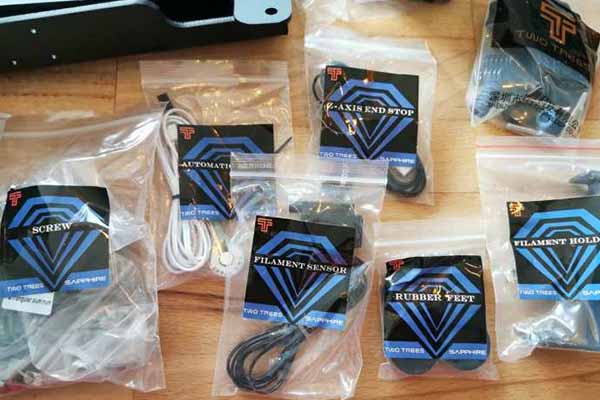 You can’t really go wrong there. Due to the size of the printer in the fully assembled state, the printer is delivered almost completely in individual parts and is not already at least partially packed in the box.

Unfortunately, the manufacturer failed with the manual. We only find a few poorly copied (sometimes almost light gray and barely legible) pages on which important things are simply missing. If you haven’t already assembled one or the other printer, you could definitely run into problems here .

What I was missing:

The cables also have to be pulled across the entire frame and are not somehow already brought forward or at least have any guides. The scope of delivery then only contains one of these plastic tubes, which are to be filled with the cables. Plus a couple of small cable ties. The cheapest, but also the ugliest solution.

I would also like to include a few words about the innards. The Saphire Plus has installed the power supply unit and the mainboard together with the display and touchscreen in the lower case. All cables are then pulled up from here.

Very quiet drivers are said to have been installed. There are also two small heat sinks in the scope of delivery. Unfortunately, it does not go into what they should be glued to.

Typically, the cables are not necessarily installed in accordance with Germany. By that I mean the sometimes poor cable cross-section, etc. Apart from that, everything looks nice and in my case nothing wobbled and none of the cables came off during transport. The power switch has an integrated fuse – we like that.

What I didn’t like, however, was a cable break in the IEC connector! The printer didn’t turn on with the cable. That shouldn’t happen. A simple swap of the cable and the printer came to life.

While I’m with cables – the cables to the heatbed have been fixed with plenty of hot glue. Here I would be one of the first prints to print a guide that prevents a cable break from occurring later due to the movement of the heatbed.

Unfortunately, I didn’t get that far to test the background noise because my mainboard was probably defective. The printer does not recognize one of the end stops that are intended to prevent it from wanting to continue endlessly in an axis. Putting the endstops back and forth brought me to the conclusion that it is unfortunately due to the mainboard, because the same endstop on another connection on the mainboard works fine, but the one that worked before on the other connection no longer works.

A quick glance over it, I couldn’t make out a cold solder joint. With that I am at the end of my hobby Latin and have contacted Gearbest about it.

Incidentally, I would also like to mention the extruder. In my case, this was screwed together completely wrong. It didn’t fit the case at all. Nothing wild. Just loosen four screws, insert the motor and the rest the right way around and screw everything back together – done. But that shouldn’t happen either.

So with this printer, the Sapphire workers must have had a bad day with bad materials and poor quality control.

However, I have to say that the printer really does deliver