These days the long announced new Geeetech A20M 3D printer finally arrived. The specialty of this printer is, among other things, that it can print in dual color. Two extruders feed the filament into the hotend and a nozzle then prints out the resulting mixture.

At the end of the day you have the option of printing with just one color, printing a gradient or printing individual elements with this and others with the other filament. That interested me a lot and so the choice fell on the Geeetech A20M.

Everything you need for assembly is included with the printer, which is packed in Tetris-like packaging. From the screws, the tools, the Teflon hoses, the glass plate, the USB cable, a manual in paper form to the SD card for the later transfer of the STL or GCODE files to the printer.

In the following video, I show you how easy it is to assemble the printer, sometimes with a quick run-through:

Even in text form, the assembly does not necessarily read very long:

First of all, it is essential to check whether all screws are still tightened ! When traveling from the Far East, a screw can come loose. Then you basically only need two screws for the left and right z-axis and the two extruders still have to be mounted on top of the crossbar on the z-axis.

In this case there are two filament holders on the crossbar. Personally, I didn’t install it there. On the one hand because they are too narrow for many of my filament rolls and on the other hand because I don’t want to transfer the oscillations / vibrations of the filament rolls, which are slightly backwards, directly to the printer.

Then the well-labeled cables are connected to the motors, end stops and filament sensors and the glass bed is attached to the aluminum plate. Now level the printer with the four screws and we can get started.

To the printer itself

The Geeetech A20M can be set up quickly as usual. Optional components enable the printer to be expanded later. For example, with an autolevel sensor for the heating bed.

The display is high quality and very easy to read. The electronics are located in the otherwise unused space below the heating bed. As a result, you don’t come into contact with the power supply unit, as with various super cheap 3D printers, and you don’t need 20cm of space next to the printer for an extra electronics box including power supply unit and circuit board, etc.

The extruders each have a filament sensor connected upstream and the A20M survives a power failure and then asks if it should continue printing.

The Marlin firmware 1.1.8 is installed on the printer and the mixer has been added, for example. Here you can easily activate a complete color gradient or just assign 100% (or another value) to one or the other extruder. Depending on this, the object is then printed with the corresponding filament. This process can also be carried out in the menu at any time during a printout.

It gets interesting the days when I print the first object with different, separate colors. For example a red figure with white eyes or something. That is also possible. However, there are no instructions for this and you have to read in YouTube and Google how to configure this in Cura. But that will be possible. You can read about my experiences in this direction in one of the upcoming 3D printer roundups . 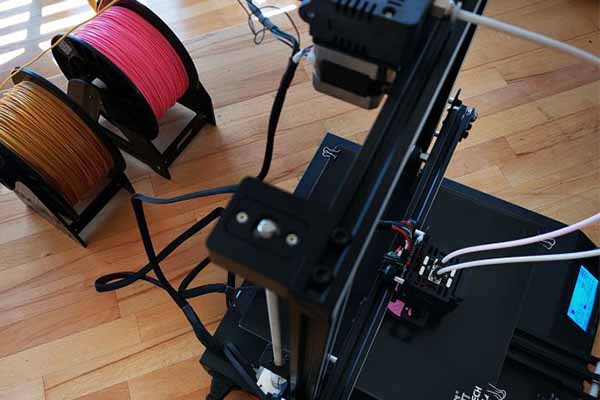 The extruders don’t look too high-quality and I’ll probably replace them with something made of aluminum / metal instead of plastic. If that happens, you can certainly read about this change in one of the next 3D printer roundups.

Of course I let myself be carried away and had a dog on the enclosed SD card printed in DualColor (gradient from 0% to 100% – i.e. from one color to the other) immediately after the assembly. That worked without any problems. However, this is almost always the case with the enclosed elements. 🙂

One more word about volume. The Tevo Flash with its similar construction is also as loud as the A20M. The fans in the electronics unit are, in my opinion, a bit poorly chosen and could be replaced by larger and quieter colleagues. But in the end you don’t sleep next to the 3D printer and then the humming is quite bearable.

In general, I can only recommend buying such printers with two extruders in the future. There is no disadvantage in that. In terms of price, the Geeetech A20M is currently around 340 EUR, similar to a Tevo Flash. If not cheaper. However, the Tevo Flash does not have the option to print another filament at the same time.

Once again the note about my 3D printer roundup . This is where further impressions and prints of and with the A20M will find their home in future editions. So if you are interested in the topic of DualColor, please keep dropping by. Usually every second Sunday there is a new round of the roundup here on the blog. Stay tuned!