It’s been a few days since I published here and the Artillery Genius teased. After that I had to wait a few more weeks and the Ortur Obsidian came even before that until the Genius arrived at me.

For a few days now it has been working in my workshop and today it is so far that I can put my impressions of the FDM printer into words. The most important features that interested me in the printer. were:

Many things have to be painstakingly upgraded on other printers, but then make the work a lot easier. In detail, it is precisely these things that are often lacking in cheaper printers. This is not a problem and you can still work with these devices, but many of these features bring a lot of comfort or a better print image or the like.

Before deciding on the Artillery Genius , you should consider whether you should buy the Artillery Sidewinder X1 , which at first glance is almost identical, but larger ? As just mentioned, the main difference between the printers is the size of the printing space. While the Genius can print 220x220x250 mm here, the Sidewinder X1 can even handle 300x300x400 mm objects. In everyday life I only print such big things extremely rarely and the Genius fits perfectly on the desk.

The Genius itself was again packed in a sturdy cardboard box with perfectly cut foam. Every centimeter was used sensibly and the entire delivery arrived without a scratch after the long journey. You can even see the imprint of the fan grille in the foam on the floor, everything was fitted so closely. 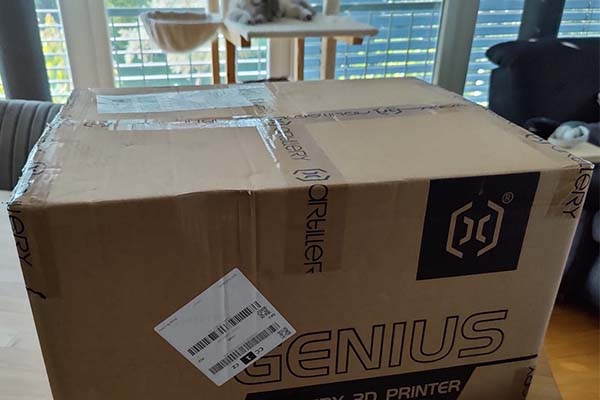 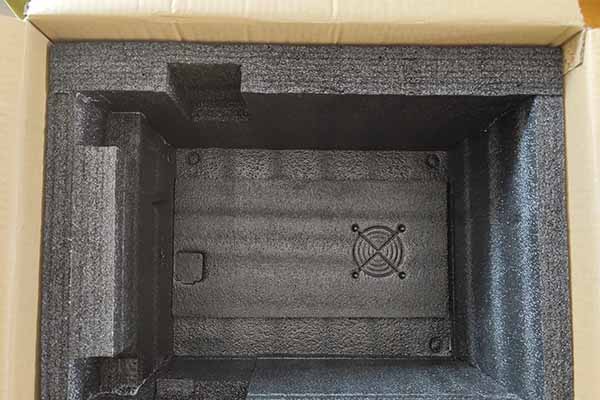 The assembly is really quick. There is even a manual in the form of a MANUAL. No badly copied notes or hidden YouTube videos – no a manual!

As you can see on the photo of the scope of delivery, the printer is really super quick to assemble. The small black Genius handbag contains the tools and a few spare parts for later use, the USB stick, a replacement ribbon cable and the printer cable.

For assembly, basically only the Z-axis has to be screwed to the housing with the electronics with four screws. Then you have to attach the filament roll holder to the top. Connect a couple of cables from the end stops etc. to the housing and that’s it. The cables just mentioned are already at the appropriate place and wait there, fixed with adhesive tape, for the corresponding counterpart.

Of course, I unscrewed the case myself first so that you can catch a few photos of the innards. If this point had not been on the agenda, the printer would probably have been up and running in about 15 minutes. 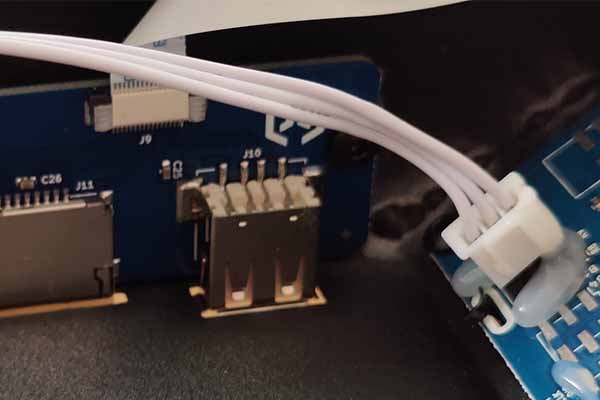 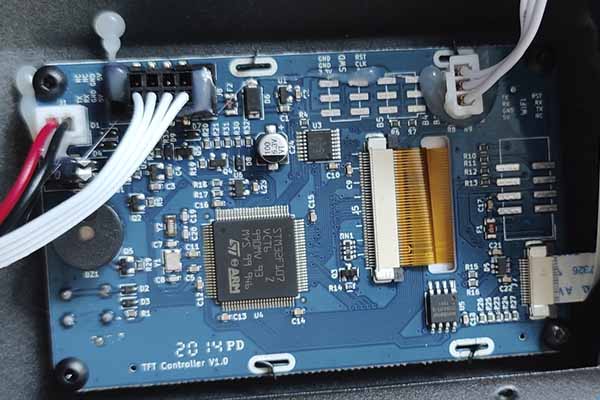 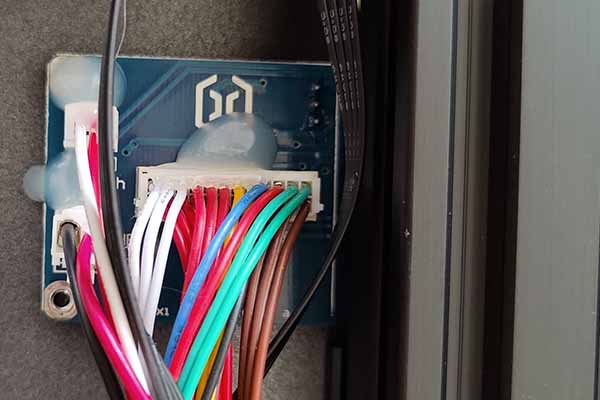 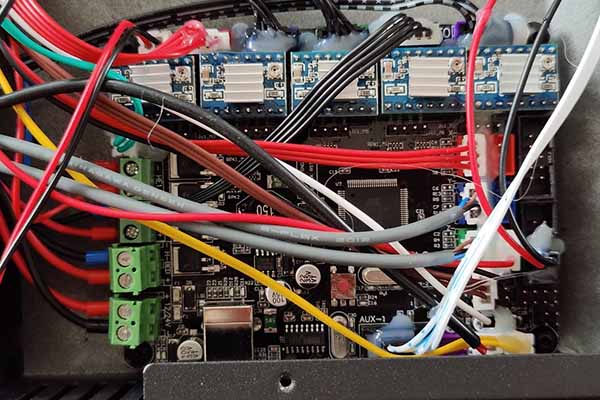 But now here are the photos of the mainboard, etc. Almost every connector has been additionally glued with hot glue so that nothing accidentally comes off during transport. For a later modification, the hot air blower will probably have to be used, but I prefer it as if a cable was disconnected before the first start-up and you would have to laboriously search for the fault.

The photo on the top left shows the USB port on the top and the card slot for the MicroSD card. This is the place I like best of all my printers. Finally no hidden card slot on the (back) side of the printer, where you have to laboriously poke the memory card in without being able to look. I like the USB port a lot more. Basically you can save twice the fiddling with the SD card. 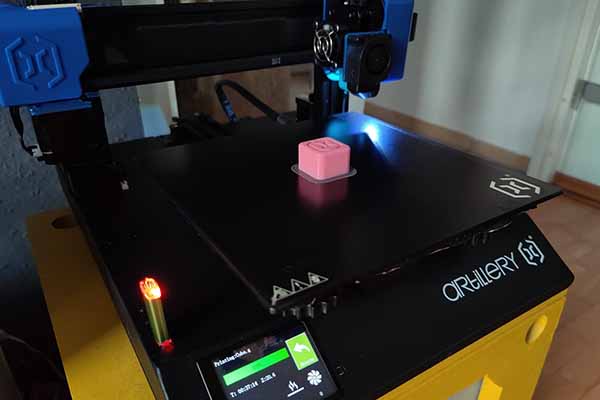 So placed, the USB stick is absolutely never in the way and always super easy to reach, right? Sometimes the solutions to many problems are so simple.

There are some blue plastic parts on the printer itself. These are by no means simply printed, but several millimeters thick and “cast” from sturdy plastic. Nothing wobbles and everything makes a super stable impression.

The direct extruder brings everything to one point. This is where we find the hotend, the extruder, the fan, etc. The filament is inserted from the filament holder directly into the printhead and in this way you can also print TPU and similar flexible materials. Also here on the print head we find this stable blue plastic along with a few metal brackets etc. 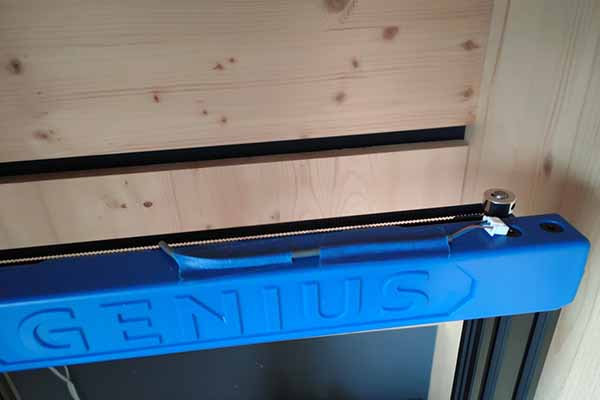 But from the factory I couldn’t just mount the sensor in a different location. A new bracket for the sensor has to be built first. I can say on the positive side that you didn’t have to deactivate anything in the printer. The printer simply prints without the connected sensor. Then of course without supervision!

The Artillery Genius also saves individual cable strands and has been given a few ribbon cables instead. These are hardly annoyingly stuck directly to the aluminum frame of the printer and are therefore not noticeable. 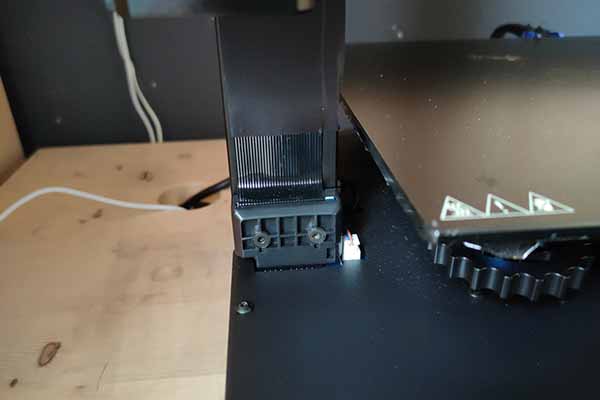 The manufacturer installed a beautiful insulating mat under the heatable pressure plate. This should ensure that the temperature of the heating bed can be kept longer. The adjustment screws for leveling the print bed are comfortably large and easily accessible. 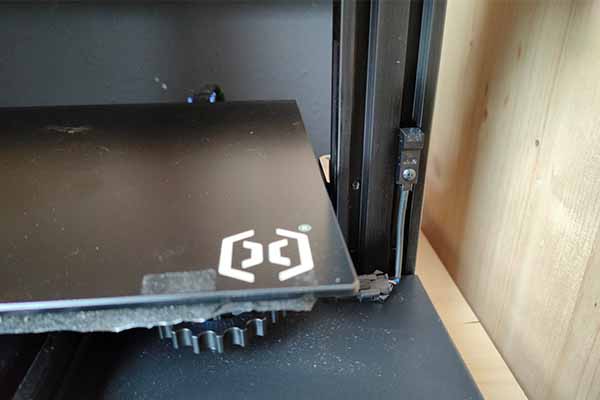 In the case of the Artillery Genius, the direct extruder also hides an LED that not only illuminates the printed object during the printing process, but also uses the color to indicate whether the nozzle is heating up or cooling down again, etc. The color can be set via the menu on the touchscreen can also be set manually.

The silicone protection over the nozzle is also not standard . On the one hand, this is intended to prevent the nozzle from losing its temperature so quickly, but it also serves as protection. This means that filament residues will not settle on it as quickly.

The glass plate (Ultrabase) warms up during printing and ensures that a model does not come off the plate unintentionally. After printing, you only have to wait a short time until the plate has cooled down again. Then the objects can almost be snapped away with your finger.

The time to heat up the heating bed and the nozzle also goes by pleasantly quickly. Since the printing bed is heated with 220V, the printer does not need 2 minutes to offer 80 degrees printing plate temperature. The nozzle also heats up quickly and then only needed roughly 1 1/2 minutes until the desired 200 degrees were reached. So it doesn’t take a lot of time until the actual object is printed.

Before you start printing, the print bed must be leveled as always . This can be done very easily using the touchscreen and the famous sheet of paper. The instructions for the printer also describe how to retrofit a BL Touch Sensor for automatic leveling. For my part, I don’t need this sensor.

Simply set all axes to Home, drive through the first of a total of five points, put a piece of paper underneath and level the distance between the print bed and the nozzle with the adjusting screw under the respective point until the paper scratches minimally. Repeat this at all points and finally check in the middle whether the paper is roughly scratched.

If necessary, repeat the whole thing again, as the distances change slightly at one point if you set another point. Finished.

It continues as always with the selection of a file (possibly one of the numerous files on Thingiverse ?) Or the creation of a file yourself.

I still had to print two things as my first official act. They are less used to demonstrate the possible print quality, because they are printed with the worst 0.3 resolution because of the good times. Nevertheless, they are an enormous help and also serve to protect!

First a cable holder for the heating bed had to be found. I’ve just read too often that a cable becomes detached from the heating bed due to the movement at the soldering points of various printers. A simple small bracket securely attaches the cable harness and should fix this problem, as the cable cannot kink easily. 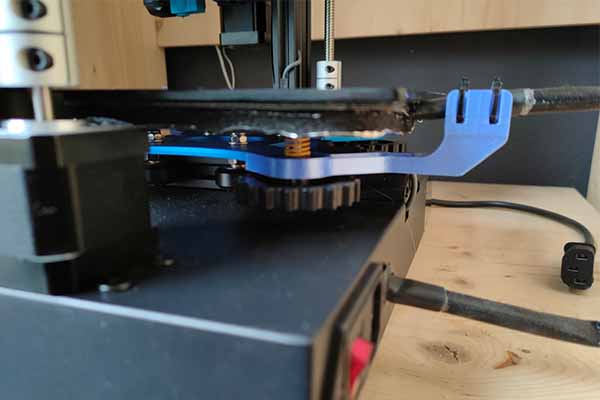 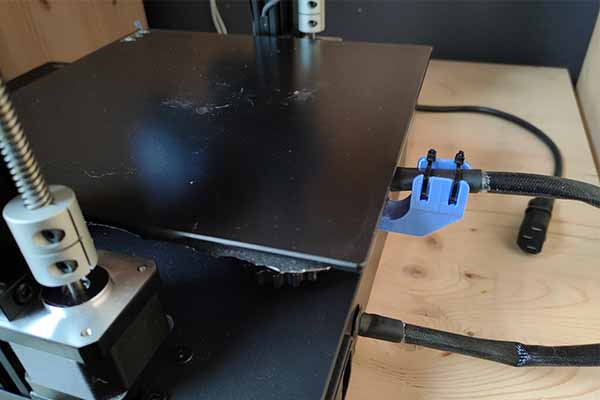 The next item on the ToDo was a tool holder . I printed a part like this on some printer and since then it has had to go to every printer. Usually there is already a ready-made bracket on thingiverse. Take a look at tools and your printer name. Maybe you will find what you are looking for. 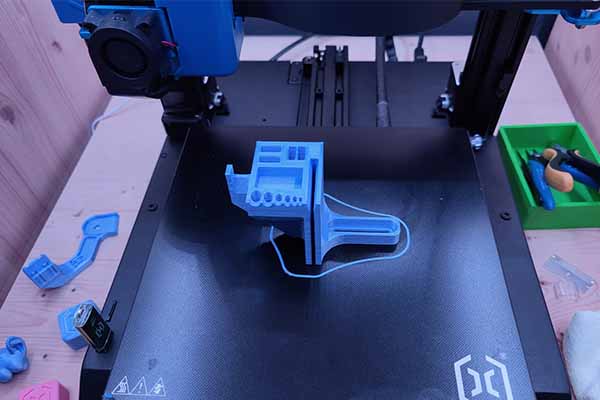 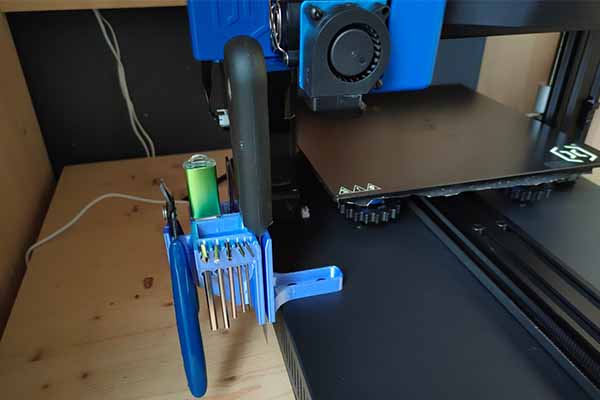 I don’t like this bracket that 100% and the position of it, but basically the bracket does what it should. I always have pliers and tweezers, along with a USB stick etc., directly at the printer and therefore within reach. Finished. As always, both models are available on Thingiverse. ( Link1 Link2 )

What can the Artillery Genius do?

Now that we’ve already unpacked, set up and modified the printer, all that’s missing is a few real test prints. I was super happy with the printer itself. The printer prints very quietly thanks to the built-in quiet driver (WOW! 4 words with D!) , The direct extruder made no problems even with TPU and the heating bed and nozzle were super hot too.

The touchscreen enables easy operation. Have I already raved about being able to simply send the models sliced ​​in Cura to the printer via USB stick? No more card reader. Simply export to the computer, export the file from Cura to the stick, stick to the printer and off you go! 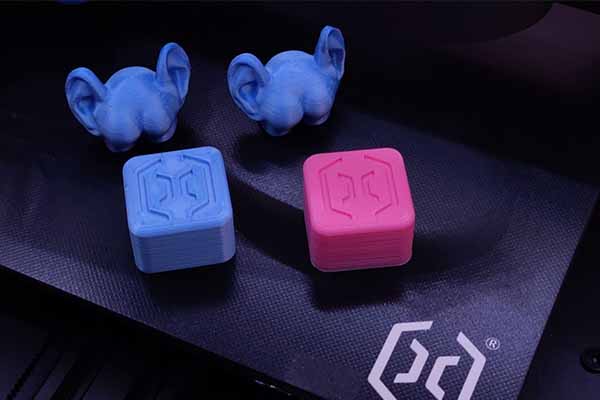 Also included with the printer was an artillery cube that printed without any problems. There were few unclean filament spots on the top. But they were so minimal that they snapped off your fingernail. 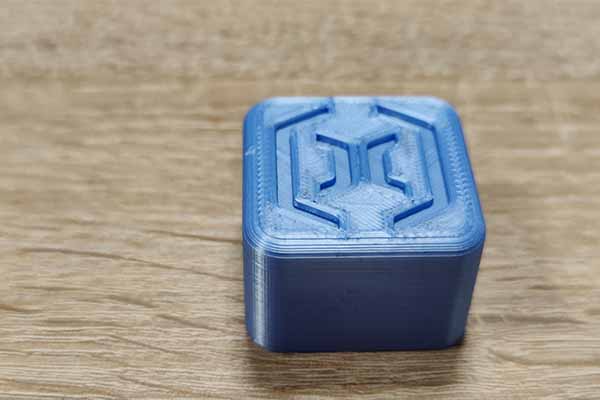 Of course, one or two asses with ears also had to be printed on the Artillery Genius. As always, so that I can easily see on my earlobe how the printer “prints in the air” and whether the printer is not pulling any threads between the ears. The object is printed in just over 30 minutes.

For me it’s just my favorite file to quickly test whether everything is going as it should. The following neon green ass with ears is now even printed from TPU and I’m happy with it. No threads – at most the beginning of it can be seen between the ears. The left earlobe was also printed without any problems. Fine! 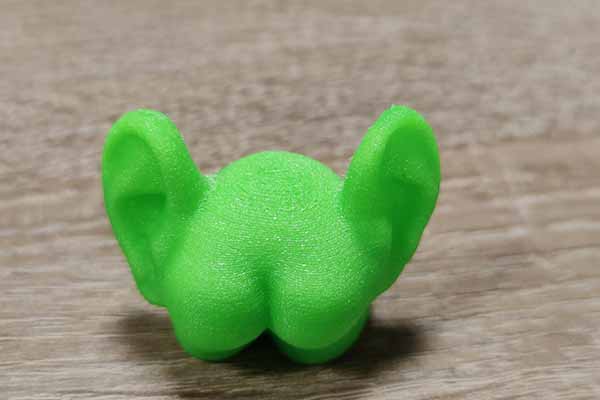 Apart from that, there was of course something useful on the list this week. Since the TicWatch Pro 3 is currently available for a test, a small adapter for the smartwatch had to be printed to match the charging station . A little work in Tinkercad and the clock can be put on properly in the evening. 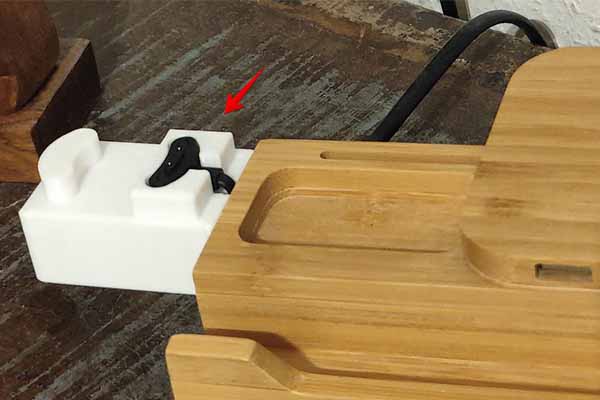 All in all, I was super surprised at the Artillery Genius, how the printer simply got along with everything from the start. All different (PLA and TPU) filaments could be printed without any problems.

As always, you will certainly hear about further experiences with the printer in the next 3D printer roundups .

The Artillery Genius now finds a new home in my printer cabinet at home. It is inherently as quiet as the Anycubic Mega-S was only after a few modifications and therefore fits perfectly into the cupboard in the living room .

At this point in time, the printer is available at Amazon on the virtual counter. A really fair price considering what the printer has to offer.

Of course you also get printers such as B. the Ender 3 for significantly less money. But these printers are nowhere near as good features and are usually upgraded over time.

So if you want to get started immediately and without major renovations, the Artillery Genius is really good for you.